There are several ways to track progression, some subjectives and some objectives. The most pleasing one to me is a subjective one about having "working software" this is not part of the agile manifesto for nothing, in delivering quality software you need to focus on having working software at all time and sooner than later. In the case of the IPhone implementation we did have working software very early on, it was not doing much but it was working and we could see new code coming in daily. This is an important proof that the project is moving on and it makes it easy to observe if a team is heading in the right direction or not.

Another interesting objective aspect I have been watching for is new tasks creation. While this is a matter of worry (from an estimation and profitability stand point) it is a very positive sign that the team has taken ownership of their project. By constantly creating new tasks a team is showing that they are in control of the workload of the project and that they are taking actions towards ensuring that there are no loose ends. 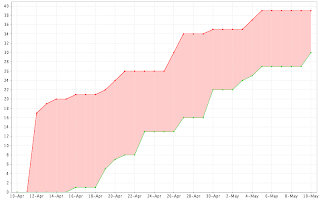 As you can clearly see the team has been creating as many tasks as they have been resolving since the initial task creation initiative. And this pretty much from day one. This is very positive.

Last but not least, from an objective stand point is the rate of code submission to the repository. Actually... to the code review board. Macadamian has been performing code reviews since its birth day, in doing so it is easy to track at what pace the code come in.

I have not looked at the evolution of the #KLOC but I can confirm that the team has submitted about a patch a day. While this is a little low for a team of 4, since many of us on this team were new to the IPhone programming environment this seems to be a quite decent rate.
Posted by Sylvain St-Germain at 9:14 AM